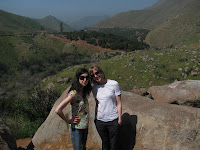 Elisa Gabbert is the poetry editor of Absent and the author of The French Exit (Birds, LLC) and Thanks for Sending the Engine (Kitchen Press). Her poems have appeared in Colorado Review, Denver Quarterly, The Laurel Review, Pleiades, Salt Hill, and Sentence, among other journals, and her nonfiction has appeared in Mantis, Open Letters Monthly, and The Monkey & The Wrench: Essays into Contemporary Poetics. She currently lives in Boston and blogs at The French Exit

Kathleen Rooney is an editor of Rose Metal Press and the author, most recently, of For You, For You I Am Trilling These Songs (Counterpoint, 2010) and After Robinson Has Gone (Greying Ghost Press, 2011). With Elisa Gabbert, she has co-written That Tiny Insane Voluptuousness (Otoliths, 2008) and Don’t ever stay the same; keep changing (Spooky Girlfriend Press, 2009). She lives in Chicago and teaches at DePaul University.

Caught in the cross-hairs, we are at cross-purposes.
I’ve heard that love is a dangerous game. Well,
I’m wearing my Kevlar vest & know the best defense
against Cupid & other Valentines-y symbols is
faux-Army surplus, old chap. This crap is golden
like oldies, like golden rectangles, when it comes
tangled in ratios & marketing plans. Put your hand
in the hand of someone whose spending power
is in service to the dowager empress. What am I
talking about? I’m talking about tweens, & evil
beings known as guerilla marketers. Take this sock
& make it into a puppet of the Faerie Queen
then recite Spenser. What do you mean, you don’t
like games? That’s like saying you don’t like
T-shirts with offensive sayings. Fitch, don’t bitch
when I wear the “B IS FOR BEEYOTCH” number.
Your own mom wears “Blondes are adored, brunettes
are”—wait, your mom? Who cares?? Her affairs
scare me. She’s an unholy combo of martyr/satyr,
so she’s one-quarter horse. Of course I’m no
expert in husbandry, but teens today are animals;
they wear flannel pants w/ graphics right on
the crotch. Our new Watch Yer Crotch line
can actually help you learn to tell time. Digital
or standard. Each pair comes w/ a lanyard
because society needs its whistle-blowers.
In this world, Fitch, there are doers & knowers;
also those who know & those who know they know.
You, w/ your antique service revolver & your
other fine excursion goods—I could catalogue
how little dialogue these have w/ our demographic
target these days. Close one eye & aim that thing
higher. A little to the left. When you fire,
fire hard & loud. That’s what it takes to get thru
the rock-hard washboard abs of the indolent crowd.


-from That Tiny Insane Voluptuousness


How did your collaboration begin?

KR: It was EG’s idea. She was visiting me in Provincetown back in 2006, and she pulled Joshua Beckman and Matthew Rohrer’s Nice Hat. Thanks. off my bookshelf at one point, and was all “We should try this.” So we did.


Have you collaborated before? If so, how was this different than other collaborations?

KR: I’d collaborated with other writers on plays and scripts, since it seems sort of natural to go back and forth on writing dialogue, but never on poems. So it makes sense, in that respect, that it turns out that in poetry collaboration, the results are also fairly conversational.

EG: I haven’t to any meaningful extent I can think of.

KR: Most of our collaborations are driven by forms, which seems logical since we can’t just default to the autobiography so common to the lyric “I” since there are two of us. At the outset of each poem, we decide on some rules, and then use those to generate our content. Some of the forms are fairly traditional like sonnets or villanelles (although EG refuses, to my chagrin, to try a sestina), and others are of our own invention, like limited freedoms and out-of-orders.


Did the collaboration affect your own work?

KR: Yes, it helped both of us lose some of the pressure to be “perfect” in every single line we ever put to the page. So much of our collaborative work gets thwarted by the other partner, and so much of it also gets discarded that it’s gotten easier to relax a little more in our solo stuff.


Did anything happen in your collaboration that surprised you?

EG: I guess I'd say what surprised me is that I often forget who wrote which lines.

EG: I think the finished product is hilarious.

KR: Yes. We frequently make ourselves LOL as they say. And hopefully that effect transfers to our readers. Frost said “No tears in the writer, no tears for the reader.” We think that’s probably true for laughter as well.


You can also read a great review of That Tiny Insane Voluptuousness at Coldfront.
Posted by Traci Brimhall at 7:19 PM