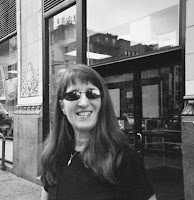 Maureen Seaton's recent publications include her sixth solo poetry collection, Cave of the Yellow Volkswagen (Carnegie Mellon University Press, 2009), and a memoir, Sex Talks to Girls (University of Wisconsin Press Living Out Series, 2008), winner of the Lambda Literary Award. Her previous collections include Venus Examines Her Breast (Carnegie Mellon University Press, 2004), winner of the Publishing Triangle's Audre Lorde Award, and Furious Cooking (University of Iowa Press, 1996), winner of the Iowa Poetry Prize and the Lambda Literary Award. She is co-author of the chapbook, Facial Geometry (NeO Pepper Press, 2006), with Neil de la Flor and Kristine Snodgrass; and co-editor, with Denise Duhamel and David Trinidad, of Saints of Hysteria: A Half-Century of Collaborative American Poetry (Soft Skull Press, 2007). Her work with Neil de la Flor has appeared in Court Green, Prairie Schooner, Gulf Coast, Indiana Review, Coconut, H_NGM_N, and other journals both on and off line. Their first collection, Sinéad O’Connor and her Coat of a Thousand Bluebirds, won the Sentence Book Award (Firewheel Editions, 2011). The recipient of an NEA fellowship in poetry and the Pushcart, Seaton teaches poetry, literary collage, and collaboration at the University of Miami, Coral Gables, Florida.

The water in a toilet rotates one way as it drains in the northern hemisphere and the other way in the southern hemisphere. This is urban legend. Still:

Last night the little boy was shadowed by satellite. It tracked his movement west across the park wild with fallen trees and ganders. The night movements of the little boy proceeded with utmost rapidity. The tracking was anonymous.


The Coriolis Force is therefore the sidewise force that has to be exerted by the carousel rider to cause the ball to move outward at radial speed v=dr/dt which, upon solving (2), is

friction: sometimes friction is a form of calligraphy.

Hydraulics: Is it the boy walking down the street dragging his Winnie the Pooh? Should Pooh be dragged with such carelessness? If Pooh had hydraulics would he hold hands with the little boy? Or drag him along as he is dragged?

I say the Coriolis is wet, a moist rendition of a sucker punch.

Once, when I was five, my mother’s microwave exploded.

Here is the effect of the wind: Hector in the living room vacuuming: see how dust particles travel around the room to the right, smacking the Le Cage chairs with their animal skin seats on their right legs until they cry out: We are dying from the act of waiting! We travel gravity and keep the stars at our shoulders. When the wind blows it begs us: Believe in wind. And we do. We know that as soon as the earth stops spinning there will be nothing else.

There is a ranter outside banging the gate: Nothing else but wind, wind spinning, wind singing, wind I am win winning whining wind wet-wet wind where is my carousel? Blistering wind a pop-eye kind of devil duster, move that car, shove that house over an inch, stoke that tree, blow that blow-hole, matey. If I speed up, shimmy across Ft. Pierce, I’ll run into ranch houses. If I skip north, I’ll hit St. Augustine with her/his old walls and forgotten graves. If the palm trees fall it will be by my hand. I will send them to their death, the sucking up of the roof will be me too. I will snort out the nostrils, hail, and slam into windows, fire escapes, parked cars. If the wind isn’t enough, I have secrets.

Here is the bird report:

Frigate bird takes to the wind and moves with no effort around to the right. Meteorologist Don Noe says, stay indoors. But the doors are bolted open and the wind and the rain and the leaves are blowing in and we can’t stay indoors so we say: water, tomato, basil, Vaseline, duck tape!

Everybody who isn’t cleaning the house (everybody but Hector), all the rest of us, is either:

Nothing, we say, is holding our skin together.

Who can tell me what is happening to the home I left behind?

It was Saturday. Seagulls sculpted the wind.

It was a sailboat that rescued the lost family member. The wind carried her to the east and lifted her to the highest bunk of the bunk bed.

I left my electron(ic)s in the refrigerator so Frances couldn’t eat them. I walked a little brazenly and self-consciously on the beach the first night of evacuation. There were several other delinquents with beers. A boogie-boarder and you know those rip tides don’t care he’s crazy, they’ll take him sideways—that angle of the Coriolis—that asswhipped Man-O-War dead zone—and I walked past the band shell where I’d danced to the faux Beatles just

last week when Frances was simply the name of my dead grandmother.

What is it with Hector? The way he folds clothes or mops wood floors? Often, I wonder, where

do Hectors come from? Blonde bombshells or storm shelters?
The plural of Hector: Hectices.

But never in the wind did the Hectices become as inspired to clean constantly as this one Hector. He was brought up to clean/sheen/dream. In this cave of new glass. In this lovely queenosphere.

Prove it! Says the little blond(e) boy growing up in the transliminal space before the hurricane:

Q: What does it feel like to be locked in a Category 4? Does Frances shorten to Frankie for a girl? If your brother was named Frankie when he was little and every time you think of him, of Frankie, you think “Frankie” even though he’s fifty-five, will his roof hold in this hurricane Frances—the name of your grandmother, grandfather, father, and brother (see alternate spellings)?

I called the builder and he says we’re guaranteed to 160 mph. (Hector says.)


How did your collaboration begin?

MS: It began in Miami in 2004 during Hurricane Frances as we and our significant others, Nico and Malcolm, watched the storm on TV and out the windows. We decided not to evacuate and we were “hunkered down,” as they say. Frances took three days to pass over and we got crushes on meteorologists Jim Cantore and Stephanie Abrams and decided to write a poem. All the stuff we saw on TV got incorporated into “The Coriolis Force,” our first collab. We wrote for a day, then collaged the piece for the next two days. Frances was my first Florida hurricane and I couldn’t believe we had electricity the whole time. I thought: “Hurricanes are fun!” I was an idiot.

ND: It all began one August during hurricane __________. (See above.) Maureen escaped Hollywood Beach to stay with Hector, Nico and I at my house in Miami so that she wouldn't get swept away by the tidal surge when said hurricane struck. We found out after the storm passed that my house is located in an evacuation zone too, so we weren't really safe, but we had fun. The storm moved so slow we got bored, so we started to write. Hector is insane and vacuumed the house while we wrote. It's a nervous tick, but he landed in our first poem. I think I wanted to kill him. But don't tell him, I owe everything to him.

MS: The rules for “The Coriolis Force” and pretty much all our collabs since have been fairly non-existent. Rule #1: Flexibility. We make parameters up as we go along (like “let’s do questions and answers on index cards” or “let’s write paragraphs on our computers” or “let’s write at the Bay” or “let’s write from those photos of Wynwood”), and we change them every time we collaborate. We like to surprise ourselves. Rule #2: Surprise ourselves. We know we’ll probably write some crap in with the good stuff. Rule #3: Don’t worry about the crap. And we make sure we have food around. Rule #4: “Make sure there’s food nearby.” And Rule #5: “Try to drag Kristine into the collaboration whenever we can.” (Kristine Snodgrass joins us sometimes and then we write as a triad. I think K. would agree that she is the queer one of the group.)

ND: Guacamole. Silliness. Sincerity. Pen/Pencil. Paper. Laptop. Sense of humor. Tiara. Max Mayfield. Weather Channel. Yes, K is so queer I have to wear sunglasses and red pumps. It's a drag, man. (It should be obvious by now I'm the idiot.)


How did you collaboratively edit?

MS: “The Coriolis Force” was edited (collaged and revised) while Frances howled and we hunkered. Since then, without the luxury of a hurricane to provide the time, we send pieces back and forth on e-mail after we’ve written them. Sometimes we wait a day to look critically at a piece, sometimes months. I’m a major tinkerer (that sounds cute, so that’s what I call it when I rip a poem’s guts out or cut all of its fingers off). Fortunately, Neil likes it when I do this. Go figure.

ND: I have anxiety editing collaborative work. However, if I don't like something (which is rarely ever), I'll say so. Or, I'll secretly delete it from the file or spill guacamole on the line I don't like. Note: this has never actually happened, but I reserve the right to make it happen.


What have you learned from your fellow collaborator?

MS: I’ve mostly learned that a Pisces man is NOT a ship passing in the dark after all, but a real human being with blood and a Pomeranian. That has been an evaluable lesson. Plus, before I began to collaborate with Neil, I was sure I would die in South Florida as so many others before me, and now, with his help, I don’t care.

ND: This is a total slice of cheese but I've learned to become a better human, a better teacher, a better lover. Well, not really, but I've learned to read minds. Honest. It's something you pick up when you have a great connection. I feel like I’m a better writer when I collaborate because I feel like I have a foundation to build from. When you're all alone, sometimes the world is a scary place, especially for a writer. What does 'evaluable' mean?

MS: It means I love you, Neil—on line.


What have you learned about yourself as a poet?

MS: I’ve learned that poets, like flowers, are not solitary or monogamous. And I’ve learned that when I have fun I am usually a Gerber daisy, which is attractive to bees, butterflies, and birds, but resistant to deer.

ND: That I'm really a pirate. I like to steal.


Does collaboration affect your own work?

MS: I have tried to collaborate with myself on many occasions over the years but find that the joy of “other” pulls me. Therefore, when I am alone as a writer now, I hear a poem, write it down quickly, and resume my day as a surfer.

ND: I don't know. I can't quantify the impact. However, I don't think it's negligible. It has helped me develop multiple writing personalities, voices, even heteronyms, which doesn't mean I'm opposed to homonyms. (If someone can define a homonym for me, I'd be happy.) This is probably the biggest gift, besides the guacamole. Again.

ND (as AD): Pretty too. Sometimes selfish. Always proud. I feel like our collaborations are little universes, the only children I'll ever have, or want to own.