Neil Aitken is the author of The Lost Country of Sight which won the 2007 Philip Levine Prize for Poetry and the founding editor of Boxcar Poetry Review. His poems have appeared in Barn Owl Review, Crab Orchard Review, diode, The Drunken Boat, Ninth Letter, Poetry Southeast, Sou'wester, and elsewhere. Born in Vancouver, British Columbia, he grew up in Saudi Arabia, Taiwan, and the western parts of the United States and Canada. He currently lives in the Koreatown district of Los Angeles and is pursuing a PhD in literature and creative writing at the University of Southern California. 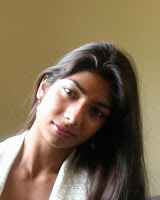 Juhi Bansal, an Indian composer raised in Hong Kong, is currently working towards a doctorate in music composition at the University of Southern California, studying under Donald Crockett. Her previous teachers have included Erica Muhl, Frank Ticheli, Frederick Lesemann, and Stephen Hartke.

Her music, with its eclectic mix of ethnic and colouristic elements, is starting to gain international acclaim. Recent performances include her piece Gulden Draak, at the Oregon Bach Festival Composer’s Symposium, her Piano Trio (played by Pacific Music Festival orchestra academy members) at Kitara hall in Sapporo, Japan, and her flute and percussion trio, T’tuooll, at the SICPP New Music festival in Boston. Her music has also been performed by percussionist Scott Deal and vocalist Jenna Lyle, at Indiana University, Purdue, and Cleveland State University, respectively, as well as numerous performances in Los Angeles.

Recent commissions include a song cycle for the Lotte Lehman Foundation, Black, for the guitarist Connie Shue, and two multi-percussion solos for recitals at the University of Southern California. Recent awards and honours include third prize in the Lotte Lehman Foundation’s Art Song Competition, 2009 and 2006 ASCAP Morton Gould Young Composer awards, and a fellowships to attend the Seasons Music Festival and Pacific Music Festival.

How did your collaboration begin?

NA: Juhi and I were in the Writer and Composer at USC which pairs up poets from the PhD English program with composers from the graduate music composition program to work on three different collaborations over the course of the semester. The pairings were switched with each project in order to allow each poet and composer the opportunity to work with a number of different people. I had heard Juhi's work with the other poets and admired both the richness of the tone of her work and variety of approaches she employed to create the best blending of text and music. Needless to say I was very excited was she asked to work with me on the last project. We were so pleased with "Halfway" (the piece that was produced for the class), that we decided to continue the collaboration. Over the next few months, I supplied three more poems which Juhi arranged into a longer work.

JB: Neil and I were together in a class at USC called Writer and Composer, where each composer is assigned a poet (or each poet a composer), and we work on three projects through the course of the semester. For each one, the poet gives their composer something they've written that they would like set to music, and then they collaborate to write a piece. I heard Neil's poetry over the course of the class when he had other composers assigned to him, and absolutely loved it - so for the final project (when we were able to choose our own poets), I asked to work with him.

The second movement of the song cycle (Halfway), was the final project for the class, and I enjoyed setting Neil's poetry so much that we turned it into a much larger piece over the months that followed.

NA: We didn't establish any particular set of rules. In fact, given my lack of formal musical training, I felt that it was wise just to let Juhi do her thing :) Although for the most part we worked independently, we did meet together whenever it felt like a piece was coming together or there were important editing decisions to be made. I was really impressed with the time Juhi took to ask questions to understand the emotional tone and trajectory of each poem -- I felt this helped tremendously and allowed us to be on the same page when deciding if lines needed to be trimmed, words dropped, or phrases repeated.

JB: There weren't any, specifically, although in the course of the class, we were expected to be writing classical art songs. I basically took Neil's texts as a starting point to sketch out musical forms and brainstorm ideas, and then met up with Neil to play through what I'd sketched out. We'd talk about it, I'd write some more music, and then we'd discuss it again.


Have you collaborated before outside of your art form before? How was this experience different than other collaborations?

NA: Not really. I have written some ekphrastic poems inspired by images and the occasional poem sequence inspired by certain pieces of music, but in terms of actually working with a living artist in a full collaboration, this project was a first for me. Interestingly enough the first piece that Juhi and I worked on was an ekphrastic poem inspired by a photograph of a woman attempting to swim across the English Channel. While the image provided the momentum for writing the poem, the poem soon triggered other associations which allowed it to go in new directions. In this respect, an ekphrastic poem is really more like an oracular experience, like reading Tarot cards or Rorschach inkblots. When working with another artist there's less of a sense of "reading" and more of a sense of "listening and dialogue." The image is a starting place, a lens, and an obsession to be explored and interpreted -- the collaborating artist provides something much different, a voice which can blend with the voice of the poem, filling in some of the dark spaces and absences, strengthening the highs, deepening the lows, and creating an experience that extends far beyond the borders of the page.

JB: I haven't actually collaborated with another type of artist before, although I have written pieces inspired by poetry or visual art. It's quite different, and much more exciting working with a live person!


Did Juhi provide any feedback on the poems or Neil make any suggestion on the music?

NA: As Juhi worked on the pieces she'd let me know what she liked and what she felt might be too repetitive or awkward to sing. I sometimes have a tendency to create long lines or run several images together. While this might work with the eye on the page, the singer's voice operates differently and needs rests and variety. Having sung in the occasional church choir, I was highly sympathetic to these suggestions. We worked together to ensure that the poem's meaning wasn't drastically changed. I felt that the changes Juhi suggested were ones that I could certainly live with. Once the piece was performed, in many cases it was impossible to detect where those changes had occurred -- to me that's a sign of success.

JB: Neil did give a few minor suggestions about the music, but generally he let me go about it my own way. I remember on the Halfway movement, I sketched out the opening with some sound effects in the instruments, to create an atmosphere before the music started, and although Neil didn't say anything at the time, I could tell he thought it was just a little weird. Once he actually heard it though, I think he really liked the texture.


What did you learn from your fellow collaborator?

NA: Working with Juhi taught me a great deal about what music can do that poetry cannot - or at least what poetry does differently to create similar effects. Writers tend to rely a great deal on repetition and escalation to create dynamic flow through a piece. Composers can shape the music behind the words, make use of counterpoint, and even more dramatically employ silence to create a stronger emotional experience for the audience. The lines Juhi trimmed and phrases she repeated tended to be places where I was using language to create a rhythmic or emotional effect that she could create more simply through music.

JB: A lot about how musical shaping, forms and motives reflect those in poetry.


Did anything happen during the collaborative process that surprised you?

NA: To be honest, the final product surprised me. Although I'd heard bits and pieces as Juhi was working on the long piece, I hadn't heard a performance of the complete work before its first public performance. When it was performed, I was surprised at how the synergy between text and music had created a brand new experience, how clearly and intuitively Juhi had grasped the emotional core of each poem, and how deeply the resultant work moved me, even though these were the same words that I'd written and with which I was already quite familiar.

JB: I was actually pleasantly surprised at how much freedom Neil gave me with the music. He was very accepting of all the directions I took with the music, but he did voice objections if he really didn't like something, which was fantastic.

NA: As you might glean from my other responses, I am very very proud of this collaboration and am excited to be working again with Juhi on another project. The collaboration gave me the rare opportunity to encounter my own poetry for the first time through the lens of another artist.

JB: I really love the finished product - Neil's poems were absolutely inspiring to work with, and I think they really helped me write better music. We're actually collaborating on another set of songs I'm writing towards a commission by the Lotte Lehman foundation later this year, as well.
Posted by Traci Brimhall at 7:57 AM